AvaTrade has hired "Lightning Bolt" as a mascot. - ForexProp

AvaTrade was founded in 2006 and has since made a name for itself in the Forex brokerage market. Ava is a global CFD and Forex broker regulated by the strictest laws, with its headquarters in Ireland.

AvaTrade, a Dublin-based forex broker, revealed today that it has signed a sponsorship agreement with Jamaican sprinting icon Usain Bolt, the fastest human ever clocked.

The precise financial details and duration of the arrangement have not been released, but we can assume it is not a modest sum given Bolt's extensive sponsorship portfolio. His portfolio also contains six-figure partnerships, the most lucrative of which is with Puma, from which he will earn more than $10 million every year until 2025.

Bolt also has sponsorship partnerships with Gatorade, Hublot, Virgin Media, Visa, and Nissan Motors, and his own character in the Temple Run video game franchise. He agreed to become a brand ambassador for PayPal-owned international money transfer service Xoom in 2018.

AvaTrade hopes to get new clients through the relationship, who are primarily aficionados of athletics and marathons. Given the track star's prominence, the broker hopes to gain more exposure in Europe, where Bolt has a considerably bigger profile than in any other region.

"Investors and athletes require a number of similar attributes," stated Dáire Ferguson, CEO of AvaTrade. To reach the top, they must be driven, quick to react, and active. This is why we're so happy to be working with Usain Bolt, a person who shares our beliefs and outlook on what it takes to succeed."

Note: AvaTrade offers a 20% welcome bonus on the first deposit. It's a big opportunity for newbie traders as well as pro traders. Then what are you thinking about? Let's go with AvaTrade and grab your bonus offer.

"Over the past several weeks, we have been inspired by the sporting greatness and professionalism demonstrated by so many dedicated athletes, making it all the more thrilling for AvaTrade to join up with one of the most legendary sportsmen of all time," he continues.

We are happy to have Usain Bolt promoting our brand and partnering with us to highlight our mission to making trading accessible for everyone around the world through our exceptional customer care, instructional guides, cutting-edge technology, and intuitive platforms."

Since 2008, Bolt has won 19 Olympic and World Championship gold medals in Beijing, London, and Rio de Janeiro. He also owns the world record in both the 100 meters and the 200 meters.

His sprinting accomplishments have earned him the media moniker "Lightning Bolt," and his success has netted him a fortune in prize money and endorsement deals.

"As a world record holder in the Olympics and World Championships, I'm always motivated by firms that are innovative and set the standard in their field."

AvaTrade provides the access and resources you need to take advantage of real-time trading possibilities, therefore I am extremely excited to collaborate with AvaTrade and help them spread their brand to many more millions of investors across the world. "Be more daring!" Usain Bolt also contributed.

Usain Bolt is not AvaTrade's first foray into the world of sports partnerships. The broker has upgraded its association with Manchester City in 2018 by becoming a global partner of the English Premier League football club.

AvaTrade's collaboration with Manchester City allows it to provide its customers with exclusive City-related promotions, prizes, including VIP excursions to the club's Etihad Stadium. 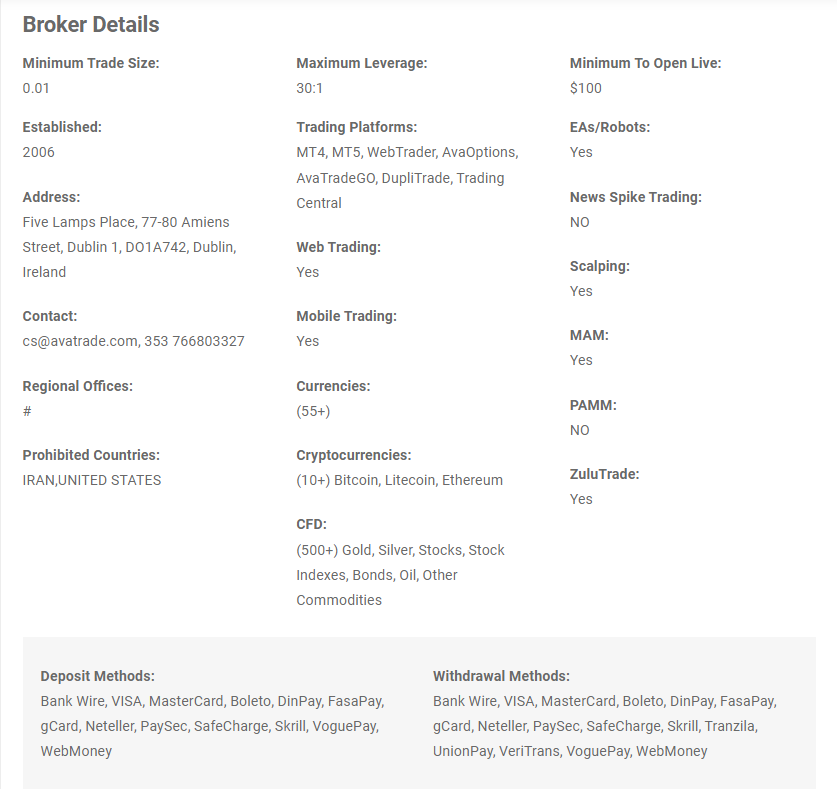 One of the most secure and governed brokerage organizations in existence, according to AvaTrade, is now. They consequently don't offer bonuses or promotions very frequently.

AvaTrade has an active

customer service department dedicated to helping customers across the world. In addition, you can communicate with them by

The live chat feature is quite prominent because it provides multilingual support, however keep in mind that it is only available constantly. However, this might be improved!

Mobile phones can also be used to speak with them, however this approach is frequently thought to be more expensive than their other two options. Additionally, the calls can occasionally take a long time to connect.

It occasionally can be irritating!

Despite everything, their email support is excellent because you'll always get a quick response.